Ripening Bananas Is Easy – Trading and Selling Them Isn’t

35 years ago, the Banana Women brought bananas to Switzerland for the first time. At the time, Beat Curau would have liked to sell green bananas to bypass the need for ripening facilities. But things weren’t so simple back then. 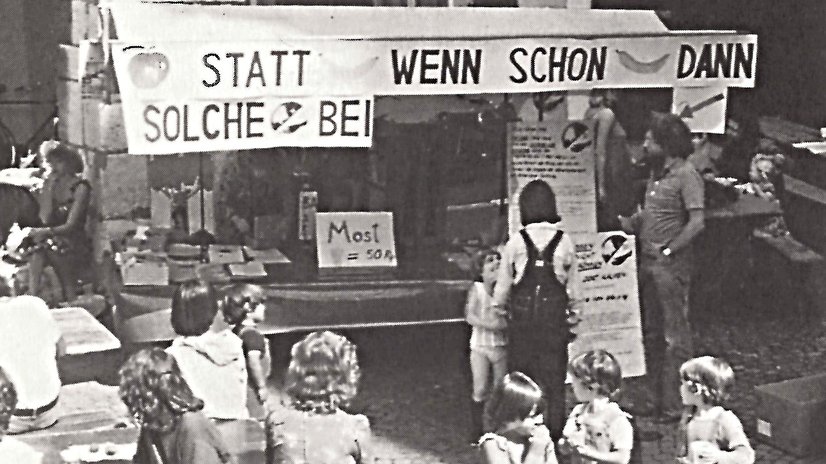 At such market stalls the Banana Women talked to the people about the bad conditions on the banana plantations.

Beat Curau had a front row seat when the Banana Women brought Nicaraguan bananas to Switzerland for the first time in 1985. We spoke with him about the challenges they had to overcome.

Why did you want to sell bananas from Nicaragua?

Beat Curau: Due to the US embargo, Nicaragua suddenly had to find a new market for its bananas. They chose Europe. Unfortunately, no one in Nicaragua seemed to have any idea of what that entailed. For example, the sea route was much longer than to the US. Some of the bananas arrived in Belgium in a pitiful state and also did not meet European standards. This led to those bananas being sold at low prices. That’s when the Banana Women saw their opportunity: for the first time, no Chiquita bananas, but producers they could help directly.

How did you end up contributing?

Ursula Brenner called me and asked if I could help. We had known each other for a few years and she invited me to a Banana Women meeting in Frauenfeld. The women discussed the possibility and the feasibility of selling Nicaraguan bananas. They had already started a campaign with OS3 (now Claro Fair Trade) and sold a shipment of bananas in Switzerland. The campaign had been a success, so they wanted to continue. Together, we founded the Fair Trade Banana Association (Arbeitsgemeinschaft GErechter BANAnenhandel), or gebana for short, and then we approached ripening facilities and stores.

What were the biggest issues?

The first step was to find a reseller in Belgium who could sell us small quantities of bananas, since we could not manage a full container. The bananas then needed to be transported to Switzerland, ripened there, and delivered to the stores where they could finally be sold the end customers. We had to build an entire supply chain. It was a huge challenge for us back then as a non-profit organisation.

A challenge that you overcame.

Well, there were always setbacks due to issues with quality, readiness to deliver, price or transport. Still, we kept at it. It was clear to us that if we eat bananas, the producers who provide them need to receive fair wages. Not Chiquita, but rather the people actually cultivating them.

How did you solve the banana ripening issue?

At first, we only found two small ripening facilities that were willing to work with us. We worked with them a few years. They each bought a certain amount of bananas directly from the ship, brought them to the ripening facility, and sold them to the few stores that were convinced by the campaign. Due to the small amounts, it was all very difficult. We always had to see how the stores would get their bananas and ensure that everything made sense in terms of pricing.

It still sounds as though you had everything under control in the end.

Yes and no. We noticed that one ripening partner was not working as had been agreed. He had sold Nicaraguan bananas without the gebana fair trade sticker. With the sticker, the bananas cost 15 cents more per kilo, which allowed us to finance projects in the country they came from.

The gebana association then had the opportunity to supply Volg. Could both ripening facilities manage the new quantities?

No, we needed another ripening facility. The best and largest one was in Basel. I had found out that this ripening facility had just gotten out of an exclusive contract with Chiquita. The Banana Women named me Managing Director of gebana, and I went there to speak directly with their Managing Director. Right away, we got along very well and the facility began ripening our bananas. It was a big, professional ripening facility, so it delivered great results. And as long as Volg kept ordering thousands of boxes per week, challenges regarding transport and quality were easier to manage. But it all lasted no more than a year and half. Our independent producer could no longer afford to export bananas to Europe. At that point, the bananas we were selling no longer came from Nicaragua, but from Costa Rica.

What was the problem?

The small independent producers were there, but they didn’t have the power to build a market in Europe. They never got the chance to supply Migros or Coop and stayed in the shadow of Chiquita and Del Monte.

Why didn’t you simply sell the bananas while they were still green?

We actually discussed that. We wanted to see what would happen with green bananas at home. We knew that a few apples could provide ethylene gas for free, but how would we distribute them? We could not sell them to stores and home deliveries were not logistically possible back then. Today, everything is different. People are used to it and the postal service can transport food. Another big problem was the quality of the bananas. Even the ripeners kept telling us that the bananas would not ripen. On some of them, the branch had already started moulding, even though the ripening process had not even started. Others were too ripe when they arrived in Europe.

What did you do with the overripe bananas?

The brown, overripe bananas were dried, packaged in the Ittingen Charterhouse and sold in world shops. We also experimented with banana puree and banana ice cream. This way, we could purchase goods from the ripeners in the summer months, since they often had boxes left over.

Would you order green bananas today?

Of course! The process is so easy. I don’t need a professional ripening room with fumigation and heating. I also don’t need yellow bananas. When a banana gets brown spots, which are actually sugar spots, that’s how I like them best. But it’s a matter of taste, of course. Some people like their bananas so green that they almost taste like a potato. 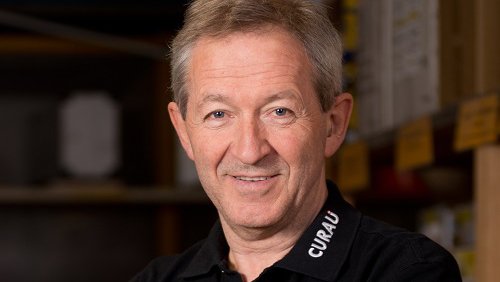 As a teenager, Beat Curau met Ursula Brunner and the Banana Women. In 1985, he started supporting them with the import and sales of Nicaraguan bananas and more.